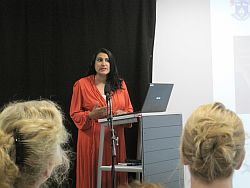 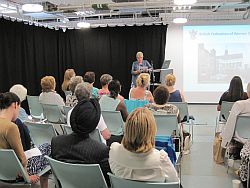 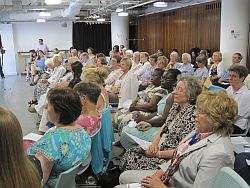 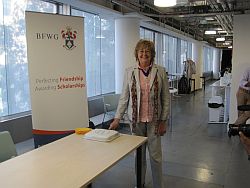 Campaigners, academics and business leaders are calling on the next generation of women in London to step forward and create a new vision for women and education.

The call came at the launch of the London Association of the BFWG at Hub Westminster on Monday (21 July 2014), where over one hundred guests gathered to hear speakers talk about how the lives of women and girls are being transformed by education, scholarships and training.

Alex Blakemore, Professor of Human Molecular Genetics at Imperial College London, said: “There are still fights to be fought and battles to be won. There is still atrocious representation of women in public life. I want to hear from young women – what is your vision?”

“We have an unparalleled opportunity to do something really important. I urge young women to come forward and tell us.”

The BFWG London Association is one of many local groups across the UK fighting to improve the lives of girls and women, particularly supporting women undertaking post graduate study or research.
Former physicist and educator and BFWG’s Immediate Past President, Jenny Morley, said: “We must engage younger members if the race to progress is to be continued. We need to keep our voices heard in the corridors of power.”

Newly appointed BFWG President Dr Gloria Banner, who has been a member of BFWG for nearly 40 years, said: “We have a significant challenge still on our hands – to smash the glass ceiling, triple glazed as it is. We have great strength as individuals, but we can literally work miracles as one large organisation.”

“We need to increase our membership – and that means reaching out to engage a more diverse and younger community of women.”

“Each year we give away a quarter of a million pounds in scholarships, and these scholarships change the lives of women in the most powerful way.”

The event was held on the eve of Girl Summit and featured keynote speaker Jasvinder Sanghera, a survivor of forced marriage and CEO of charity Karma Nirvana.

Jasvinder gave a moving account of her own story of forced marriage. She said: “I watched my sisters being taken out of schools to be married to men they had only seen in photographs. I was promised to a man from the age of eight.”

“I said ‘no’, I wanted to do my exams. But I was locked in a room until I agreed to marriage. I ran away to Newcastle and my mother said I could either come home and marry, or from this day I would be considered dead. I was disowned by my family.”

“I went on to set up Karma Nirvana because an education opens your mind and no child under the age of 16 should have to be contemplate marriage. My plea to you is this: Work with us, the victims need to know there is support and helplines, and they can reach out without the fear of repercussions.”

The launch showcased the work of BFWG, including how it is supporting women’s education in Afghanistan.

Cynthia Burek, Professor of GeoConservation at Chester University, and BFWG’s Co-ordinator of International Relations, said: “We were determined to help women in Afghanistan. We gave a bursary to a female student for a PhD. Why a PhD? Because a title opens doors.”

Anyone interested in becoming a member of the BFWG can sign up on the Join Us page.