The conference brought together a highly eclectic mix of delegates, from a wide variety of countries. I was delighted to have 2 ex staff members of mine from my old university there and some colleagues who also attend with me the Bulgarian Comparative Education Society Conference in Bulgaria each year. To add to these well-known faces were people from Australia, the USA, UK, Nigeria, Japan, India, South Africa and Mexico, to name just some of the countries represented.. Most spoke excellent English, though I was sorry for the 3 Japanese who seemed to be totally at sea and not really able to follow what was happening at all.

In addition to the attending delegates, there were ones from various parts of the world who presented by the use of Skype. One person in Los Angeles had to present at what for him was 6.30 am to fit into the conference schedule. 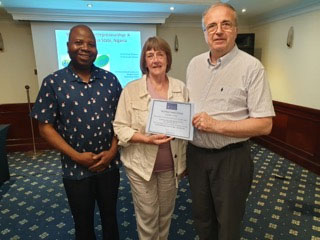 On the first day I was presented with a certificate for Best Paper in Education Knowledge .This was a close to a 10,000 word paper, on the initial findings of the Project undertaken by BFWG members across the country. My heartfelt thanks to all those who gave up their time to interview and submit the results, plus those who agreed to be interviewed. It was hard work getting things going initially but then the results began to flow more freely for collation. Almost immediately themes began to emerge. I decided not to use any figures to report the results. as so many of the women interviewed and education press reports had confirmed that many academic women in Higher Education have been forced by university departments (science and psychology particularly guilty here) to adopt quantitative methods of reporting research, rather than qualitative ones which many women and some men prefer.  So, in solidarity with many of my sisters I recorded feelings, experiences and understandings expressed by the interviewees.

Our respondents came from a very wide variety of university types, from Oxbridge, Red Brick, Post 92, New Universities post 2000 and those with church affiliations or private funding. The disciplines of those who responded were also extremely wide from sciences of all types, medical education, psychology, veterinary sciences to film studies, arts and education and social sciences. There was a small number of respondents who worked in Wales and Scotland and ages ranged from late twenties to those in retirement. Employment was from Post Docs. attempting to find full time jobs in Higher Education, right through the range to Vice Chancellors. Ethnic minorities were represented but in small numbers, as there is a problem in particular with black women’s representation in Higher Education.

The paper was very well received by the audience, with many questions being asked, as it had sparked a great deal of interest. I had been given 45 minutes to present as an award winner, rather than the normal 30 which helped. As a result of the presentation I was asked if the work could be carried out in India and if I could attend one London University to repeat the presentation to staff there. The paper was presented as BFWG Research and as a result many delegates heard about us and our aims for the first time.

To conclude: - thanks again to members for helping me to raise the profile of BFWG internationally. This and the GWI workshop in Geneva have resulted in raised interest in what we are doing and in the research itself. There has even been a proposal for a book from a Germany based publisher. However, next step is a report for BFWG, some press announcement and if possible, information sent to the Universities’ Minister. Watch this space!

In addition, I would like to thank the Research Ethics Committee who were so helpful and supportive in ensuring that the research carried out met the standards expected at Higher Education level, which is essential if the results are to be taken seriously. Without their support we would not have been able to spread the findings internationally and have them taken seriously by Higher Education peer reviewers, which occurred in the case of the workshop and the paper presentation and publication.

Online go to http://www.newera.ijkie.org/journal-issues/ The paper will be listed under my name Gillian L.S. Hilton