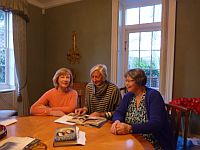 Bobbie Neate is an author and new BFWG member who recently gave an intriguing talk to our Winchester Association about her book “Conspiracy of Secrets”. Here is her blog:

My personal detective story is about a conspiracy that happened one hundred years ago.

To my amazement I discovered that our elderly and married Prime Minister had an illegitimate son with a young girl just before WWI. Further political figures of the early twentieth century and aristocratic families conspired to cover up this birth and colluded with our Liberal Prime Minister H.H. Asquith in the year 1912 to keep this secret. That child was my stepfather.

Both through family trauma and then through mounting interest my journey continued as I set to learn the truth about Asquith’s illegitimate son. It was a secret the conspirers had tried to cover up for one hundred years. And they nearly got away with it. It is scary that the secret is still being protected from prying eyes, as no politician or the powerful families involved will break their silence. Historians of that period seem strangely quiet as well.

My stepfather, the illegitimate son of Asquith, turned out to be a demon and a psychopath. (Asquith had similar characteristics). I had no idea about this mental illness or the damage that these kind of deranged men could do until my darling mother was so tragically treated. Her misery drove me to find out more about our rather strange and secretive stepfather who was keeping my mother prisoner in her own home. I had never asked questions before because I had been groomed not to. Stepfather was far too scary for me to ever do that.

My personal detective story continued as I researched the history books and the more I researched the more fascinating the story became. Stepfather had always claimed to be part of an elite social circle and bragged of knowing famous politicians. I asked more questions and tried to remember my childhood. Then I carried out genealogical research. By matching the two titbits about his upbringing that he had let fall from his bragging mouth, (when we were children) with research papers, I found everything fell into place.

But who were those two strange women who lived in mother’s home? Were they all part of the plot? It’s an unbelievable story of subterfuge and cover-ups.

I feel I am still fighting the establishment and the Liberals. Why keep so silent when the illegitimate birth was one hundred years ago? What else are the politicians trying to hide? My book is still full of questions. Why did Stepfather, Louis T Stanley, take four years to do a degree in theology during WWII? Why does the master of the college still deny this was unusual? Did Asquith have more illegitimate children? Did he fully concentrate on saving the lives of our soldiers in WWI when he was busy writing letters to his lover during cabinet meetings? Why have some of these letters gone missing?

More questions involve family members: Why did my mum stay with Stepfather? Had my wonderful uncomplicated Mum fallen under this man’s spell or was she too frightened to leave? Psychopaths use their intelligence to manipulate persuade and deceive but they use their guile to always appear plausible. Once my mum had accepted his offer of a cup of coffee she probably had no chance of ever escaping. He was after her money.

My story is full of twists and turns. Part of the excitement is to discover why stepfather brought two strange women into the house and what their contribution was to this deeply buried secret. I know nobody else could ever have discovered this secret. Only I could have put together the titbits that he had divulged when I was an inquisitive child. It proves to a truly fascinating tale.

My message to potential genealogists is not to trust any paperwork as it often lies. Read my book to find out how and why.

‘Conspiracy of Secrets’ by Bobbie Neate is published by Metro Books, an imprint of John Blake Publishing.