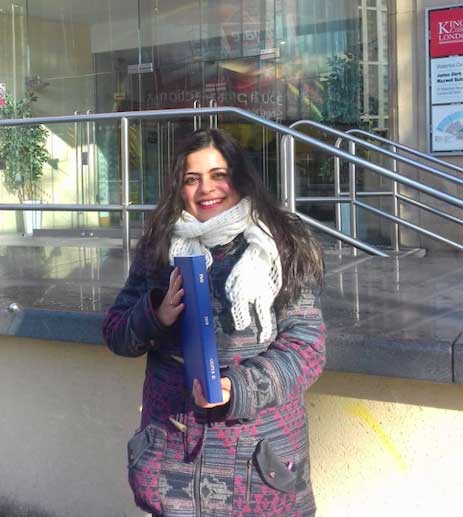 Dr Diya Gupta, winner of the BFWG Barbara Northend Scholarship, which was of great help during the writing up of her PhD thesis.

Diya grew up in Kolkata, India, and studied for a BA and MA in English Literature at Jadavpur University, Kolkata, where she secured the highest First in her year for both degrees. She then read for a Second BA and MPhil in English Studies at the University of Cambridge, before working in the fields of academic publishing, academic communications and freelance journalism, and volunteering for six months in a little village in the Spiti Valley in the Himalayas, 3,600 metres above sea level. You can read about her mountainous adventures here: http://diyagupta.co.uk/blogs/spiti.

Diya returned to academia with her doctoral research in 2015 at the Department of English, King's College London, which focused on the first literary and cultural examination of Indian experiences of the Second World War, studying colonial photographs, letters, memoirs, interviews, poems, novels and philosophical writing, and taking into account the lives of both Indian servicemen and civilians. This is a little-known yet important history that looks at the Second World War from colonial eyes. You can find out more in a short film here: https://www.youtube.com/watch?v=hbKO-C-kZ8A&t=17s.

Diya very much welcomes the public-facing aspects of her research, and has written widely about her work for The Conversation, CNN News 18 and The Telegraph (India). She has spoken at public events on her research at the Imperial War Museums and the British Library, and for the BFWG.

A particular aspect of her doctoral research that Diya really enjoyed was interviewing former Indian veterans and their family members about their war experiences. It turned out that, even though there is little public remembrance of the realities of their wartime years, private memory remains enduring and vibrant.

In 2019, Diya successfully defended her doctoral thesis, and is now a Postdoctoral Research Fellow at the Institute of English Studies, University of London. She is working on a book proposal to ensure that her work is published and reaches a wide audience. More on this soon!