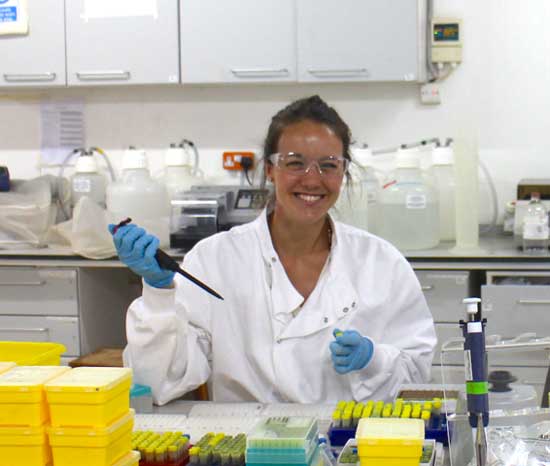 Lucy studied biochemistry at the University of Oxford, specialising in virology and immunology. She completed her masters research project at Princeton University, studying the way herpes simplex virus manipulates the host cell, which gave her a first experience of virology research.

She then completed her PhD in the molecular and cellular basis of infection at Imperial College London, where her research focused on norovirus, better known by its media nickname of the Winter Vomiting Bug.

Lucy was awarded the BFWG Centenary Scholarship in the final year of her PhD, which greatly supported her through the period of writing her thesis and the transition of moving with the lab to the University of Cambridge.

There she continued her research into norovirus still in the lab of in the lab of Professor Ian Goodfellow. During this time, she won funding for a research visit to establish a collaborative project in Uganda, studying the impact of norovirus infections in Ugandan children.

In 2015, Lucy went to Sierra Leone as part of the Ebola outbreak response, where she helped to track changes in the virus and follow its spread in real time to contribute to measures to control the outbreak, and to provide molecular biology support to antiviral clinical trials.

She was then awarded a Sir Henry Wellcome Postdoctoral Fellowship to study the interactions between HIV and the immune system in the lab of Professor Greg Towers at UCL, where she is currently based.

She has recently expanded this work to compare how the hepatitis B virus also escapes from our immune systems. Lucy now lectures at UCL on norovirus and the ebola virus.

Alongside her research, Lucy runs public engagement programmes in infectious disease both in the UK and Sierra Leone. Lucy began the Sierra Leone programme in partnership with colleagues at the University of Cambridge and University of Makeni and charity EducAid, after witnessing how the lack of understanding of infectious diseases created fear and hindered the early Ebola outbreak control efforts.

With funding from The Wellcome Trust, they developed and trained a local team to run a week-long programme of exciting hands-on discovery-based science activities for school children, aimed to spark conversations and curiosity about infectious diseases and science.