Working in Europe – a Female Perspective

Penny Hoffmann-Becking  gave a colourful account of 25 years’ experience working in Europe. Before embarking on her five-year course at Imperial College, London in electrical engineering, business and humanities she had not thought about working abroad.The degree course required sponsorship by a company for a year beforehand; in her case, a radar components manufacturer in Manchester.  In the course of time, she obtained a placement through AIESTE (Association for the International Exchange of Students for Technology Experience) which found her at a French Grande Ecole in Brittany. This was the beginning of her European network. 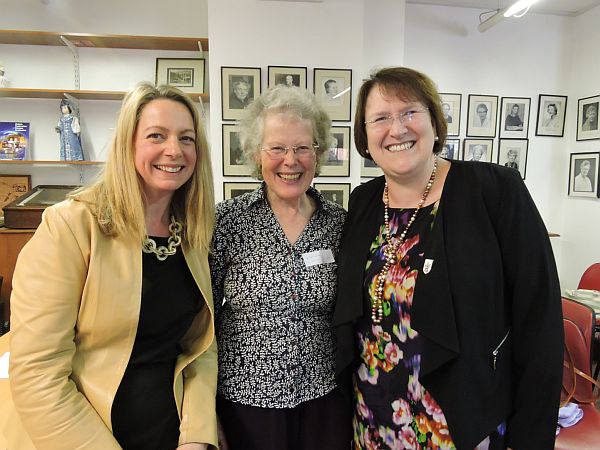 After Imperial College, she attended the  Goethe Institute in Germany and, armed with good French and newly-acquired German, started her career proper as a marketing graduate trainee for British Petroleum working in Austria and Germany for the next four years. For five years Penny then worked in management consultancy with Price Waterhouse Cooper which involved travel all over Europe and the rest of the world, starting in the UK  and ending in the German practice as Director.
Returning to the UK, freelancing as a management consultant and raising a family took care of the next ten years. A three-year period as Director of Organisational Change Management at One6 Consulting brings us up to the present.

In considering a career in business, the emphasis lay on thinking in a European rather than a UK context. The EU is acknowledged  the UK’s largest trading partner with free movement of people and goods. Cross-border integration is widespread with many companies consolidating parts of their business across countries.  Companies increasingly seek an international workforce of talented individuals with the aim of improving their business by the introduction of new technology or ways of working from international best practice.

The successful career woman in Europe has much to consider: Cultural awareness; Travel; Language; Legal frameworks, norms and working practice awareness; Networks and contacts. Firstly, there are different ways of doing business, adjusting to one another’s sense of humour and also not always maintaining ‘your way is right’. Willingness to travel often for brief assignments can be very tiring while working as a resident abroad can be stimulating. Effort made in learning another language is invaluable in understanding side conversations in meetings and  helps create awareness of the difficulties  experienced in discussing complex issues  not in one’s native tongue. Knowledge of public holidays, labour laws and the concept of shared parental leave  need to be noted. Lastly, success relies on an invaluable network of trusted associates, with integrated marketing managers across Europe sharing ideas, resources and supporting  through tough times.

Penny concluded her talk with the pitfalls of informal networking. She recounted when as a project manager, and a young single woman at that, she was expected and required to take the client (a much older, often married man) out to dinner and anticipating awkward dynamics called on a trusted male team member to act as chaperone. Things have improved since Penny started working in the 90s but she still maintains that being the only woman in a roomful of men makes you feel “other” and requires greater effort in; making informal connections essential in a career.

This talk was delivered by Professor Kurt Deketelaere from Leuven University. A lawyer by discipline, Professor Deketelaere is the General Secretary of LERU (League of European Research Universities) which promotes excellence without gender bias.  21 research universities  throughout Europe (of which 5 are British) belong to the league which stipulates involvement in intensive research and can only become members by invitation.

Following a survey in 2006 it was discovered that although the inclusion of the gender  dimension was greater among member states,  the level of implementation remains insufficiently supported.  The pace of change is too slow and more joined up efforts and a systematic strategy towards longer term institutional change is required.
Also,  Despite more women than men completing an undergraduate course in the STEM subjects, fewer women embarked on courses at the higher level.  Of those that complete a PhD more women in the STEM courses continue whereas in the humanities and social sciences fade away – “the leaky pipeline”  It is noted that often the bias against women is relatively small but the cumulative effect is noticeable.

LERU have produced a series of recommendations to remedy the situation. These are directed at the universities, the funders of research, governments and even academic publishers.

It is suggested that the commitment to implement the findings should come from the top of universities and percolate through the entire organisation.  There should be sufficient funding to enable long term planning of gender equality activity.

Funders, who were less likely to implement a gender equality dimension in research projects, should monitor the results of funding gender actions.  It is also suggested that they provide longer funding periods to make research careers more attractive.  British institutions such as the Wellcome Trust already have a good record in this.

Governments are asked to consult with universities about how best to attract and retain women and to work with positive incentives.

Finally, academic publishers are asked to ensure an appropriate gender dimension in research is embedded in their science policies.

These measures, with the addition of an open labour market for researchers, optimal circulation and transfer of scientific knowledge via digital means together with transnational cooperation and competition, should result in progress.

Professor Alex Blakemore        Athena Swan
Professor Blakemore gave a stimulating talk on the plight of women in academic life, as regards career progression, attaining professorships and taking part in important research projects. Despite achieving more highly than men at university entry level, women rapidly disappear from the statistics when research projects and promotion are examined (in Europe the ratio of female to male professors is 1-6). Combining short term contracts with motherhood and child care is hard, but also the still persistent hegemony that males are superior to females, results in the domination of males in research teams, with women left to fulfil teaching roles; a massive waste of talent.

The Athena Swan (AS) group attempts to ensure that all good work is rewarded fairly.  To obtain an AS award HEIs have to examine the treatment of females employed in STEMM departments (and soon humanities), by self-analysis reports, action plans for improvement and evaluation of the effects of the action. AS volunteers assess departments and several award levels are available. NHS research contacts in future will only be awarded to departments having at least a silver award.

In order to help women’s research careers in universities, the following steps need to be in place. Enabling retention of posts during pregnancy and child care, tackling marginalisation and women’s exclusion from research projects, ensuring expectations are equal for both genders and auditing of pay, including bonuses and benefits, to see where women are losing out, especially at professorial level. In addition support for career development of women academics is required, leadership training, mentoring, work-shadowing and above all changing the male dominated culture, so that ambitious women can see a future in academia.