The BFWG fully supports the Government’s move to make Forced Marriage a criminal offence which is due to become law this Summer.

Prof Graham Ixer invited Aneeta Prem, the founder of Freedom charity which raises awareness of Forced Marriage, as part of the Step Up to Social Work programme in the Faculty of Education, Health and Social Care at the University of Winchester, where the Dean and Pro-Vice Chancellor, Professor Joyce Goodman, is an active BFWG member.

The special Master class event for the University’s social work students and invited guests was on the invisible crime of Forced Marriage and dishonour based violence. Between 5000-8000 women in the UK are suspected of being subjected to forced marriages.

Aneeta Prem gave a very moving account of the many stories of how on average women ages 14-16 years are at risk of forced marriages. Once subjected to forced marriage then rape, slavery, incarceration and other forms of abuse take place as young women then become the property of men.  On average men aged 22 years are chosen, from countries all over the world.  Many victims of this crime are unaware that they are actual victims.  The charity is targeting friends and the wider community, urging them to get in contact with them and the police where they think someone is at risk of a forced marriage.

From this July Forced Marriage will become a criminal offence for the first time.  Aneeta Prem said that she wants to get to these victims before it’s too late.  She sees education as the main route before they are captured and taken away to be forcibly married.

Forced Marriage is everyone’s business because we all have a responsibility to challenge this horrific crime as part of living in a civilised society where everyone’s human rights matter.

The event was filmed and a shorten version of the presentation is available on YouTube
https://www.youtube.com/watch?v=hm-kq0UlRd0

Aneeta Prem will be on “Power Lunch” London Live at 1230-1330 on the 17th April to discuss this issue. London Live is the new Evening Standard Television service. 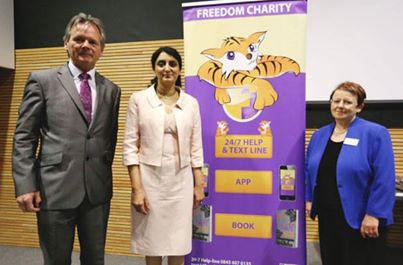