History of the BFWG Scholarship Trust

BFWG can be justly proud of its sponsorship of women scholars. The first discussions on opportunities for post-graduate research for women started as soon as the Federation had been formed in 1909 and led to an appeal for funds for the award of a “prize fellowship to a woman who had proved her capacity for research by work already produced or on its way to publication”.

The competition was fiercely contested and the first award of £120 (worth £11,498 (2020)) was given to Caroline Spurgeon in March 1912 to complete and publish her work on Five hundred years of Chaucer criticism and allusion. The pilot had been successful and led to a determination to give awards alternately to women researching arts and sciences.

The following year an award was given to Dr May Whitely OBE, a chemist working then at Imperial College London. She fought hard to get women into the Chemical Society. The third woman to receive the prize in 1914 was Dr. Mary Williams lecturing in French at University of Wales, Swansea. 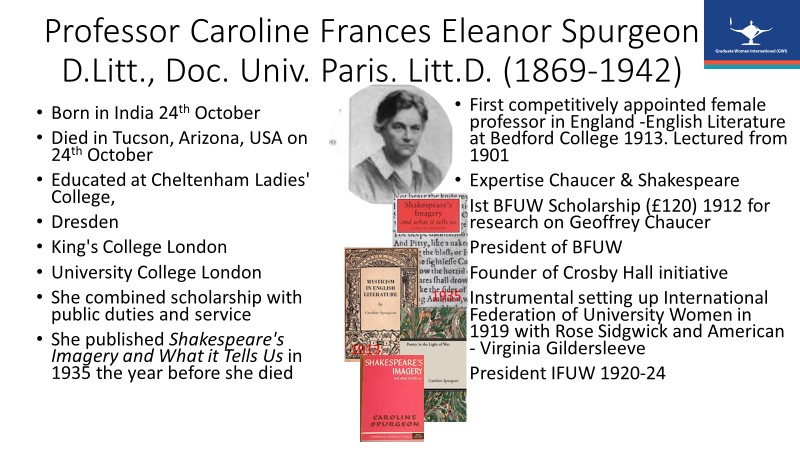 They continued during the war and in 1915 £100, (£10,347 in 2020) was given to Muriel Wheldale, later Mrs. Onslow, to continue her research on plant genetics and biochemistry. In 1916 the award went to Alice Lee at Bedford College, London, an applied mathematician who worked on gun trajectories not the birth rate she had hope to do. Eventually she worked to prove there was no correlation between skull capacity and intelligence.

Thus this award has evolved through time and helped women advance in their academic careers, given to those deemed worthy, those students who show the promise of becoming role models in the future, outstanding academics or leaders in their chosen fields through academic excellence. Much has been achieved in that time, but if the pioneers who established the scholarships in 1912 believed that a hundred years later women would no longer need this help they would alas be disappointed. The steady increase in applications; shows that the work of the Federation in this area is as important as ever.

Much has changed over the last century, notably the range of subjects on which candidates are working, the means by which applications are submitted, but now as then, the criteria for an award are academic excellence and individual research, and busy women academics give of their time to assess applications. The latest awards were given to women researching urban security, fibromyalgia, music therapy in refugee camps, climate change and societal breakdown and online political communication to name just a few of the 11 prizes given in 2020. Many of these subjects did not even exist in 1912. Members of the Federation continue to raise money for scholarships, and many have made generous donations or bequests in their wills. The Federation can proudly say that it disputes the assertion that women do not help other women!

In the past few years amounts in the region of £30,000 are given away annually while in addition, triennially £5000 is given to the international federation - Graduate Women International, to be given and chosen by them to an outstanding woman PhD researcher studying at a British University. This is one of several internationally awarded grants and it is interesting that in the last few years those awards have often gone to women studying at British Universities. It shows that the quality of Tertiary education and research in the country is second to none.

The Trustees and scholarship committee is made up of several diverse individuals willing and able to give up their time to forward the aim of helping female researchers achieve their potential in their chosen fields. We are academics and experts in many different fields needed to successfully forward this aim. We are often humbled and astounded at the ability of potential applicants and our job is very difficult scrutinising the applications. With more money we would love to help all these able women – unfortunately this is not possible. We do our best with what we have.

We specifically fund final year PhD students who will eventually be given the title of Doctor which opens doors to women in most countries of the world. We have argued that this is in keeping with the aims of those first women who set up the scholarships so many years ago.
Small biographies of the current Trustees follow, along with information about some of our award winners.

Remember we are a Charity dedicated to funding education at the highest level by giving grants to women of outstanding calibre. A very worthwhile aim. 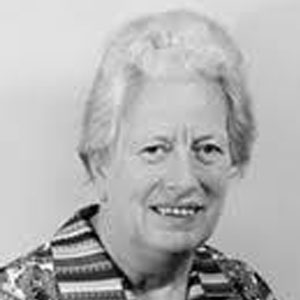 Dr Marjorie Shaw was Senior Lecturer in the Department of French at Sheffield University, and warden of a hall of residence.

She was a member of the Academic Awards Committee and a Vice-President of the Federation. 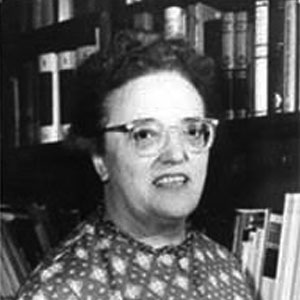 Eila Campbell (1915-1994) was a leading figure in the study of Geography, and in BFUW. She became a long-standing member of the Academic Awards Committee. She was a stalwart of Birkbeck College, starting as an undergraduate while working as a teacher. She liked to boast that there was no job in the Department of Geography that she had not tackled, working her way through posts as demonstrator, assistant lecturer, full lecturer, and in 1970 Professor of Geography and Head of Department and, after retirement, Emeritus Professor. 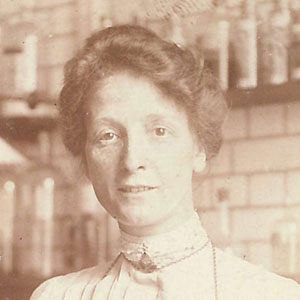 The May Whiteley Prize

May Whiteley (1866-1956) was an important figure in the history of women in chemistry in the UK. Together with Ida Smedley Maclean she spearheaded the movement for women to gain admission to the Chemical Society. May Whiteley spent her entire career at Imperial College, ultimately becoming Assistant Professor of Chemistry. During the First World War she led a team of women chemists to synthesise beta-eucaine, a local anaesthetic, for which she was awarded on OBE. 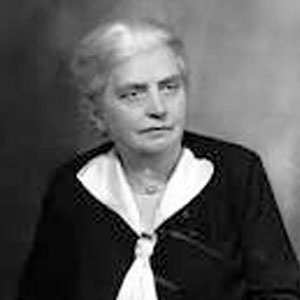 Eleanor Rathbone (May 1872 to January 1946) was an independent British member of parliament and long-term campaigner for family allowance and for women’s rights. She was a member of the noted Rathbone family of Liverpool.

Denied an Oxford degree by her gender, she was one of the steamboat ladies who travelled to Ireland between 1904 and 1907 to receive an ad eundem University of Dublin degree (at Trinity College Dublin). In 1905 she assisted in establishing the School of Social Science at the University of Liverpool, where she lectured in public administration.

In 1897, Rathbone became the Honorary Secretary of the Liverpool Women's Suffrage Society Executive Committee in which she focussed on campaigning for women to get the right to vote.

Florence and Edith Stoney were two of the more remarkable figures from the early days of the Federation, even amongst a group of such remarkable women. They were the daughters of Johnstone Stoney, professor of physics at Trinity College, Dublin, and best known for introducing the term ‘electron’. Florence, born in 1870 became the UK’s first female radiologist founding the x-ray departments at both the Royal Free and the Elizabeth Garrett Anderson hospitals in London. Edith, two years younger, studied mathematics at Newnham College, Cambridge, achieving the position of 17th wrangler (but of course no degree). She became head of physics at the London School of Medicine for Women. Edith was a founder member of BFUW and became its first Treasurer in 1909. Florence was also an early member.

Professor Ruth Bowden was the first woman to become the Sir William Collins Professor of Anatomy at the Royal College of Surgeons.

She was a member of the BFWG Academic Awards Committee and the IFUW Fellowships Committee.

Dr Mary Bradburn was a mathematician, who spent most of her academic life in the mathematics department of Royal Holloway College.

She was also convener of the Academic Awards Committee.

Dr Beryl Green was a head teacher before gaining a PhD in architecture. She was deeply religious and had a great love of the fine arts.

The Margaret K B Day Prize

Margaret (Peggy) Day read physics at St Hilda’s Oxford, and the pursued a career in industry. She was Treasurer of BFWG.

Miss Helen Joseph was an early graduate of Bedford College, London, and set up a prize for students of architecture or engineering in 1962.

Dr Kathleen Hall had a particular interest in the education of girls and women in or from countries of low per capita income. She was secretary of the Academic Awards Committee.