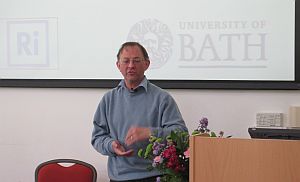 Professor Christopher Budd, our main speaker this year, is Professor of Applied Mathematics at the University of Bath and at the Royal Institution. He took his first degree at Cambridge then went to Oxford as a Fellow of St. John’s College for his D. Phil. He has had a most distinguished career with many published research papers to his credit and has won a large number of prizes for his work.

His speech was instructive, varied and often amusing, sprinkled as it was with personal anecdotes which kept the audience thoroughly entertained.  He began by quoting some of the common misconceptions about and descriptions of mathematicians –“evil soulless geeks” for instance – and then stressed how creative maths. really is. He claimed it can foretell the future and is at the heart of art and music.

The topic was the relevance and centrality of mathematics in our daily lives and to illustrate it he began by showing a portrait and asking us to identify the mathematician depicted. It was the man he called  his ‘hero’, the great mathematician, Maxwell, who developed Faraday’s work and went on to discover radio waves which are crucial to so many of the appliances we now take for granted in our daily lives.  From there he moved on to Page and Rank, the inventors of Google, then dealt briefly with Internet Security, Banking and Communication and Medical Scanners. These were all developed thanks to mathematical  discoveries.  He ended the impressive but necessarily selective list with Florence Nightingale who was a noted statistician as well as a nurse and who introduced the use of medical statistics following from her work in the Crimea.

The range and variety of mathematical discoveries and their applications is huge but one of the most obvious, of course, is the invention of the computer and the resulting easy access to worldwide information, the latter a spin-off from space science. Despite this the Professor stressed the continuing need for hard copy, for books and libraries. 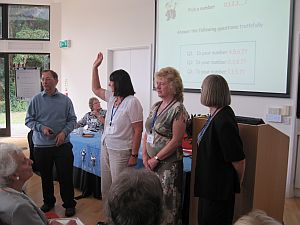 He then went on to explain how computers now work and used audience participation to demonstrate how the use of binary numbers can help identify someone who is lying. This was followed by brief explanations and complex diagrams of how Google works and how I-Pods compress information.
He left us in no doubt that much of the future will be strongly influenced by mathematical discoveries and said he is much encouraged by the numbers of young people studying the subject, among whom the number of female students is rapidly increasing because girls are now out-performing boys at A Level Maths.

He took a number of questions and, despite the fact that he was due to fly to Melbourne that evening, stayed on to take a Workshop in the afternoon. It is always a pleasure to hear someone who is really enthusiastic about a subject and Professor Budd communicated his excitement about maths. in a way that was accessible even to non-mathematicians. We are profoundly grateful to him.