In May 2019 Sutton Coldfield members had a chance to meet Queen Elizabeth 1 -“Gloriana”, at her political zenith in the grounds of Tutbury Castle

There is no doubt that Gloriana had one of the most profound effects on English and European politics.

The Protestant queen in the cold bed was given a matter of months on the throne by observers of the day believing she could not hope to survive. Queen Elizabeth, in fact, went on to rule England longer than any other monarch before her.

Her passionate belief in the English people and her lack of martial ambition combined with a brilliant mind and outstanding political skills is why she was so hugely successful. Confounding all. 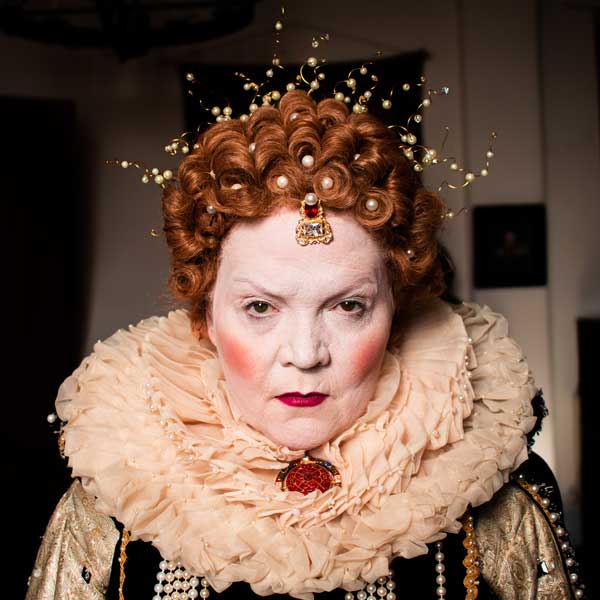 Tutbury Castle has been occupied for around 10,000 years, as there is evidence that flint tools were produced there in the Stone Age. It was occupied by the Romans, and the place-name tells us that it was also an important place in the Anglo-Saxon period – Tutbury means ‘look-out fortress’. It is first recorded in 1071, when it was granted to the Norman baron Henry de Ferrers, but it was built in 1068-9 as one of a line of castles establishing Norman control across the north Midlands. Tutbury commanded a strategic position in the heart of England, and became the centre of a major lordship, spreading across the borders of Derbyshire, Staffordshire and Leicestershire, and altogether the de Ferrers family held over 200 manors spread across much of England. Henry’s grandson Robert de Ferrers was rewarded for his loyal service to the king by being made earl of Derby in 1138, and Tutbury remained in the hands of the de Ferrers earls of Derby until 1265. At that time Simon de Montfort, earl of Leicester, led a rebellion against King Henry III, and Robert de Ferrers also rebelled on his own account. Both rebellions were crushed, and the rebels’ lands confiscated, and were granted to the king’s younger son Edmund. By this time the de Ferrers held much of Lancashire, and Edmund became earl of Lancaster, Derby and Leicester.

Tutbury has remained one of the chief castles of the Lancaster estates ever since. Edmund’s great-grandson, Henry of Grosmont, was promoted to become the first duke of Lancaster in 1351, and his grandson Henry of Bolingbroke took the throne in 1399 as Henry IV. Ever since then, the Duchy of Lancaster has been held by the reigning monarch, but has remained separate from the Crown estates, and Duchy properties have been used by kings and queens as their private estate. Henry VI gave Tutbury Castle and the surrounding lands to his wife, Margaret of Anjou, while Edward IV gave it to his brother George, duke of Clarence, who planned a court there to rival that of the king himself. Richard III spent extensively on new buildings, although his reign was too short for him to have the chance to enjoy it, and Henry VIII made Tutbury the main royal stud.

Elizabeth I imprisoned her cousin Mary Queen of Scots at Tutbury Castle on four occasions. The first of these was 450 years ago in 1569, and the Castle has just opened a new exhibition on Mary’s imprisonment to commemorate the occasion. Mary’s last visit was in 1585, and it was during that stay that the plots began which were eventually to result in Mary’s execution at Fotheringhay Castle in 1587.

A new great hall was built at the Castle in the 1630s by Charles I, parts of which still survive. However, the outbreak of the English Civil War in 1642 meant that Tutbury once more became an active fortification, holding out for the king despite the fact that many in the area supported Parliament. Both Charles and Price Rupert visited the Castle during the war, and it was one of the last places to hold out for the king before he himself surrendered to his enemies. One of the terms of surrender for the Castle was that it should be ‘slighted’, which meant that it must be sufficiently damaged that it could never be used in warfare against the king.

That explains the ruinous state of Tutbury Castle – and many others – today, but there is still much to see, from the original Norman motte, by way of the 12th century chapel, 13th century gatehouse, 14th century walls and great tower-houses to the remains of the great hall of Charles I, which houses the Castle’s exhibitions. After the Civil War, the Castle became a working farm for the next 300 years, and farm buildings were added next to the great hall in the early 19th century. These have now been refurbished as the Castle’s tea rooms, ensuring that there is a warm welcome for visitors, whatever the British weather may hold in store.

Grateful thanks are due to a Lesley Smith (Gloriana), Curator of Tutbury Castle and to Jayne Titchener and Carol Hannam of Sutton Coldfield for organising this event.

Presentation on Plants & the Planet

Norfolk and Norwich LA – The ups and downs of Elm Hill