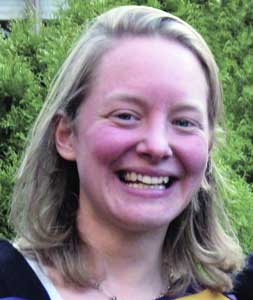 Division of Psychology and Mental Health, University of Manchester

with a thesis on

The Feasibility, acceptability and validity of using a smartphone app to assess 'basic symptoms' as predictors of psychosis relapse.

Having graduated with a joint honours degree in Psychology and Philosophy (2:1) from the University of Oxford, Emily worked as a volunteer Research Assistant on a rehabilitation unit and as a Support Worker on an acute psychiatric ward. This led to an interest in clinical research, particularly in the area of relapse prevention in psychosis (schizophrenia).

After completing a Master's degree with distinction at the University of Manchester she then worked there as a Research Associate for two years.

Having taken two maternity leaves during the course of the PhD, she is now part-time and due to finish in November 2019. She has submitted all five of her PhD studies to peer reviewed journals with three now published, one in press and one currently under consideration.

She won the Medical Research Council’s prestigious Max Perutz Science Writing Award in 2015. The competition brief was to present why her research mattered n a way that would interest a non-scientific audience.

Her successful entry for The British Federation of Women Graduates (North West) 2019 Travel Bursary used an updated version of her winning entry for the prize.

FInd out more about the Travel Bursary