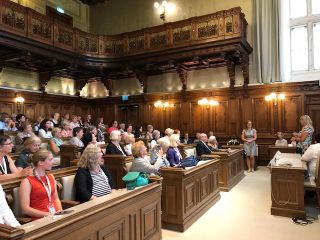 More than one hundred participants from twelve countries in Europe arrived in a sunny Graz on 24th August. BFWG was well represented with nine members plus a husband. After Registration at the Franciscan Monastery in the middle of the city where our meetings took place, we walked to the Rathaus (Town hall) where we were welcomed officially on behalf of the Mayor by a young woman Councillor particularly concerned with minority rights. We then had the first of many delicious, typically Styrian hot buffets with local wine.

Next day was the Conference on the theme ‘Changing Cultures’ addressing the challenges of immigration to the host country and to migrants. The Keynote Speaker Helga Konrad, Executive Director of Anti-trafficking at the Institute for the Danube Region & Central Europe, reported the increased feminisation of migration with many foreign women in low ranking and poorly paid jobs below their potential skill level, vulnerable to violence and to the negative stereotyping linked with prostitution. The suggested solution is empowerment of these women by improving their choices and education. We heard about refugee integration programs in Austria which involved two way dialogue between host citizens and immigrants based on acknowledgement of the difficulties and respectful discussion and reflection on potentially different value systems. Often activities like painting or cooking together made a positive contribution, particularly in improving language ability. 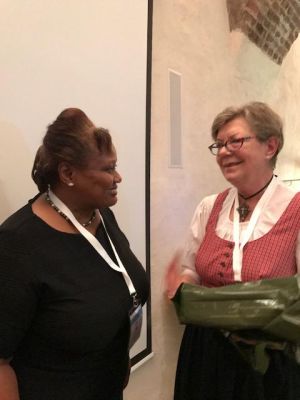 After lunch there was a choice of workshop sessions. Catherine Pinion, Alternate CER reports: ‘This workshop on the problems faced by immigrant or refugee women was a talk with a refugee from Syria. Linda had been a Syrian journalist working in Turkey and spoke of her experiences – the effect of the chaos caused by constant bombing and of violence against those who protested. Approximately one third of refugees are women. Regarding integration in new communities, she highlighted the difficulty of language, especially when completing official forms. Work tended to be short-term, usually in low-paid occupations, and women often remained unemployed longer than men. Questions raised revealed the efforts made to promote better integration, using legislation, but also the close links between migration and trafficking’.
Christel Moor, Chair of Hegg Hoffet GWI Fund for Displaced Academic Women, reports : ‘An excellent, informative and active workshop explaining the Netherlands ‘In Dialogue’ approach to integration of migrants with the rest of the community, as used in Rotterdam and then throughout the country’.

On Friday evening we celebrated the Austrian Federation (VAO) 95 Anniversary. BFWG President Patrice presented VAO President Elizabeth Gyorfy with a gift of Harrods Teas.
On Saturday at the AGM the revised Constitution was passed after amendment by the Board so that at least two (rather than one as originally proposed) Members of the Board must be from countries that are affiliated to Graduate Women International (GWI). This pleased our delegation as it reflected comments made by BFWG Members at our Durham AGM which I had fed back to Edith Lommerse, President of UWE. Eileen Focke- Bakker, GWI VP told us that the GWI Board was allocating 500 SF per annum for 3 years to UWE towards collaborative working. We saw an inspiring on-screen greeting from Geeta Desai, GWI President. CERs gave their power point presentations (mine is on the website) as did the candidates for Vice Presidency of UWE.

I am delighted to report that our recent Vice President, Aisha Alshawaf was successful. Congratulations to Aisha! The other VP from Rome, Guiseppina (Pina) Foti owns a language school and Aisha has already met up with her whilst she was at a conference in London.

A Gala Reception and Dinner held at a rooftop Restaurant was the Finale to a friendly and productive meeting. 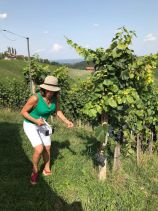 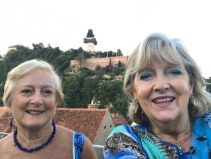 The optional tours on Sunday took some of us to Southern Styria for wine-tasting and lunch. Here we see the new VP sampling some grapes!